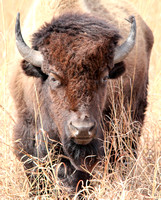 For more photos of American Bison in my online gallery, click here!

FAMILY: Bovidae (cloven-hoofed, ruminant mammals such as Bison, water buffalo, antelopes, sheep, and domestic cattle. A ruminant is a mammal that chews cud- partially digested food that is regurgitated for further chewing) 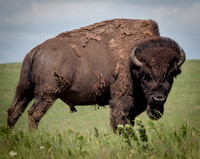 LIFE SPAN: American Bison can live up to 18-22 years in the wild, and over 30 years in captivity

HABITAT:  Bison are migratory animals whose herds migrate south in winter and move back north in the spring.

Although Bison once roamed across much of North America, today, throughout most of their historic range, they are considered “ecologically extinct” as a wild species- except in a few national parks and other small wildlife areas. The largest population of wild Plains Bison (about 4,000) can be found in Yellowstone National Park (a park that is located mainly in the state of Wyoming but also includes sections of Montana and Idaho). The largest population of wild Wood Bison (about 10,000) can be found in Wood Buffalo National Park (the largest National Park of Canada that is located in northeastern Alberta and the southern portion of the Northwest Territories) 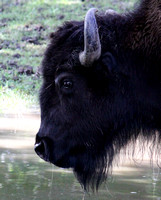 A male American Bison is called a bull

A female American Bison is called a cow

A group of American Bison is called a herd

In May of 2016, President Obama signed the National Bison Legacy Act into law, which officially made the American Bison the national mammal of the United States.

The terms “buffalo” and “Bison” are not interchangeable as they are not the same animal. The big fluffy animals that people typically call “buffalo” are actually Bison! And the true buffalo (eg water buffalo) look more like large bulls. These two animals are related, however, as both Bison and buffalo are bovines (a sub-family of bovids). But Bison are in a different genus than buffalo.

Historians believe that the attribution of the term “buffalo” to the Bison of North America started as a derivative of the French word for beef, “boeuf.”

Even though Bison are large mammals, they are extremely agile and fast runners too! They are able to change direction quickly, they can jump over high fences, and they are capable of running up to 35 miles per hour. Additionally, Bison are strong swimmers.

Bison were like “walking Wal-marts” for Native Americans as these creatures provided the early inhabitants of North America with a variety of different resources such as meat for food, hides and fur for clothing and shelter, tails for fly swatters and whips, bladders for tobacco pouches, stomach lining for water containers, tendons for bowstrings and sewing threads, dung for fires, and hooves that could be boiled down and made into glue.

Trails carved during the seasonal migrations of animals like Bison and deer were some of the earliest traceable paths into the American wilderness, and these paths were used by Native Americans, explorers, and pioneers.

Yellowstone National Park is the only place in the U.S. where Bison have lived continuously since prehistoric times. This means that these Bison are the pure descendants (free of cattle genes) of the early Bison that roamed our nation’s grasslands. In 2015, it was estimated that 4,900 Bison were living in Yellowstone (the largest population of Bison living on public lands). 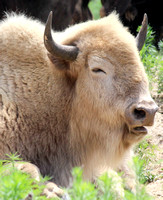 During prehistoric times, millions of Bison roamed all over North America. They ranged from the forests of Alaska and the grasslands of Mexico all the way to the Great Basin of Nevada and the eastern Appalachian Mountains. Prior to 1600, the estimated population of American Bison was between 40 and 60 million!

In the 1800’s, the US government paid hunters to kill Bison in order to deprive Native Americans of a much-needed resource, to keep Bison from being in the way of the new railroad system, and to feed those who were building this railroad system across the United States. Additionally, a long and intense drought hit the southern plains of the US between 1845-1860 which contributed to the collapse of Bison herds.

By the late 1800s, the once mighty herds of American Bison had dwindled down to a few hundred of these animals left in the United States. No other species on Earth has seen their population decline so rapidly!

Had it not been for a few private individuals working with tribes, states and the US Department of Interior, the Bison would be extinct today.

The American Bison population began to recover thanks largely to James "Scotty" Philip who began reintroducing Bison into South Dakota. Starting with five Bison that “Scotty” purchased in 1899, the herd had grown to an estimated 1,000 head of Bison by the time he died in 1911. 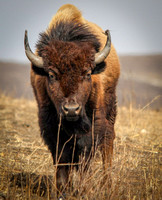 WHAT CAN I DO TO HELP AMERICAN BISON?

Post messages on social media platforms such as Facebook, Twitter, and Instagram and send emails to your family and friends expressing your concern for the plight of the American Bison and encouraging them to become involved as well.

Write letters to your elected officials in Washington DC and to leaders in nations where American Bison live explaining why the conservation of American Bison is important to you and encouraging these officials to work to help keep American Bison from ever becoming extinct in the wild. 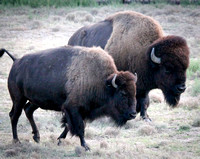 US Department of Interior: 15 Facts About Our National Mammal: The American Bison

The Vintage News: James “Scotty” Philip is the man who saved the buffalo 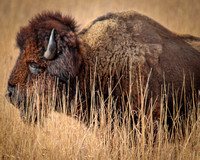