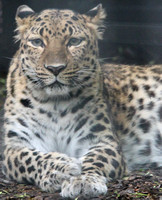 For more photos of Leopards and other members of the cat family in my online gallery, click here! LIFE SPAN: Leopards can live up to 15 years in the wild and up to 23 years in captivity.

HABITAT: Leopards can be found in sub-Saharan Africa as well in parts of Asia such as India, Russia, China, Korea, Malaysia, and the Middle East. These big cats are very adaptable and are able to live in several different habitats- forests, grasslands, mountains, and deserts. 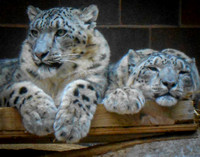 Snow Leopard 1From the Henry Doorly Zoo in Omaha, Nebraska

A male Leopard is called a leopard

A female Leopard is called a leopardess

A young Leopard is called a cub

Leopards are the smallest member of the four "big cats," the other three members being Tigers, Lions and Jaguars.

Leopards are truly solitary animals who spend most of their time alone. These isolated felines have their own territories which they mark with scratches on trees, urine scents, and poop to warn other Leopards to keep out! Males and female Leopards only cross territories to mate.

Leopards spend a large portion of their time in trees. Their spotted coat helps them blend into their surroundings and provides them with a natural form of camouflage. These big cats often haul their prey into trees to keep it safe from other animals

Leopards are fast cats who can run up to 36 mph and can leap forward about 20 feet through the air (approximately the length of three adults who are lying head to toe!)

Leopards communicate with each other through unique calls. For example, when one male wants to announce his presence to another male, he’ll make a hoarse, raspy cough. These big cats also growl when they are angry and purr when they are happy and relaxed (just like domestic house cats!).

A Leopard’s tail is almost as long as its entire body. This helps the Leopard with its balance and makes it possible for this big cat to make sharp turns quickly.

According to the International Union for Conservation of Nature (IUCN) Red List of Threatened Species, the conservation status of Leopards is as follows:

Leopards are vulnerable, which means that they may become endangered if their circumstances don’t improve.

The IUCN states that while Leopards are widely distributed across Africa and Asia, their populations are becoming reduced and isolated as these big cats are being increasingly cut off from large sections of their historic range.

Leopard populations are declining dramatically due to several factors such as Leopards being continually persecuted by poachers and trophy hunters, their habitat becoming more and more fragmented, Leopards increasingly becoming victims of the illegal wildlife trade, their skins being excessively harvested for ceremonial use, and the declining populations of the Leopard’s prey.

WHAT CAN I DO TO HELP LEOPARDS?

Educate yourself about Leopards and their circumstances by reviewing the materials presented below in the Resources section and other materials you may be able to find on your own.

Post messages on social media platforms such as Facebook, Twitter, and Instagram and send emails to your family and friends expressing your concern for the plight of the Leopards and encouraging them to become involved as well.

Write letters to your elected officials in Washington DC and to leaders in nations where Leopards live explaining why the conservation of Leopards is important to you and encouraging these officials to work to help keep Leopards from ever becoming extinct in the wild.

And when you shop at Joe’s Cowtown Photos, you can designate Leopard-centric programs and initiatives such as the World Wildlife Fund’s Adopt a Leopard Program, the Leopard Conservation Project, and National Geographic Society’s Big Cat Initiative as the beneficiary of the charitable portion of your purchase. (For more information on Joe’s Cowtown Photos charitable giving program, Cowtown Photos Cares!, click here.) 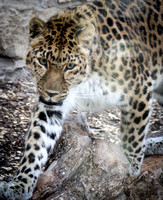 Reference.com: What is a Male Leopard Called? 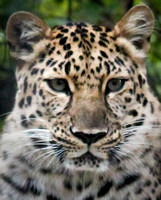