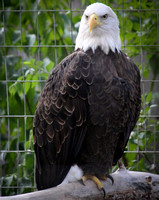 For more photos of American Bald Eagle in my online gallery, click here!

ORDER: Accipitriformes (Order that includes most of the diurnal birds of prey like hawks, eagles, and vultures. Note: Diurnal = active during the daytime, the antonym of nocturnal)

FAMILY: Accipitridae (A large family of carnivorous birds that have comparatively rounded wings, long legs, and an unnotched bill. This family includes the typical hawks and goshawks, the kites, and generally the eagles) 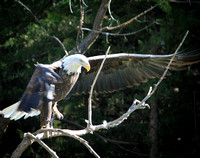 LIFE SPAN: American Bald Eagles can live up to 18-22 years in the wild, and over 30 years in captivity

HABITAT:  American Bald Eagles can be found throughout North America. According to the Smithsonian National Zoo’s Bald Eagle page, their breeding population ranges essentially from central Alaska through a large portion of Canada and the Great Lakes across to Maine, through the Rocky Mountains to Yellowstone, along the Gulf coast from Texas east to Florida, then north along the Atlantic coast to New Jersey, with scattered breeders elsewhere.

These majestic birds chiefly reside in coastal areas or near large inland lakes and rivers that are teeming with fish. American Bald Eagles can be located perched in large trees along the shores of these bodies of water or majestically soaring through the skies above.

DIET: American Bald Eagle are carnivores (meat eaters) who primarily eat fish. They will also eat small animals like rabbits, reptiles, amphibians and crabs as well as smaller birds and other bird's eggs. 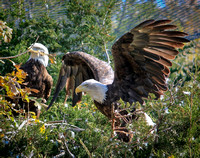 A young American Bald Eagle is called an eaglet

A group of American Bald Eagles has many collective nouns, such as an aerie, convocation, jubilee, soar, and tower of eagles. (However, according to the Michigan University Museum of Zoology, Bald Eagles are typically solitary creatures. When there is abundant food, though, they may gather with others in groups of up to 400.)

On June 20, 1782, the American Bald Eagle was chosen as the emblem of the United States because of its long life, great strength and majestic looks. Since this majestic bird has come to be an enduring symbol of freedom for it is said “Living as he does on the tops of lofty mountains, amid the solitary grandeur of Nature, he has unlimited freedom…”

The American Bald Eagle is the only eagle that is unique in North America as the Golden Eagle can be found throughout the entire Northern Hemisphere.

American Bald Eagles aren’t really bald! They get their name due to their white heads being coupled with their dark brown bodies. This contrast of colors makes them seem bald from a distance.

Juvenile American Bald Eagles are patchy brown in color with white blotches. They don’t obtain the full distinctive plumage that’s found on mature birds until they are 4-5 years old.

American Bald Eagles have long, wide wings that give these majestic birds the ability to stay aloft and conserve energy by soaring

The piercing, full-color vision of American Bald Eagles is their most developed sense, which they use to locate prey 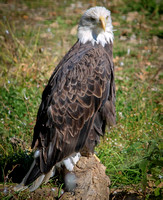 American Bald Eagles are considered Least Concern according to the International Union for Conservation of Nature (IUCN) Red List of Threatened Species. This means that the American Bald Eagle population has been evaluated but it does not currently qualify for any other category such as “near threatened”, “threatened”, “endangered”, or “critically endangered”.

Additionally, following World War II, many people in the United States began using DDT as a pesticide to control mosquitoes and other insects. The major use of this toxic substance resulted in the pollution of our waterways and the poisoning of American Bald Eagles (and other animals) who ingested fish that had absorbed this harmful chemical. DDT interfered with the ability of the American Bald Eagles (and other birds such as peregrine falcons and brown pelicans) to produce strong eggshells. This resulted in eggs with shells that were so thin they frequently broke during incubation or simply failed to hatch. This population collapse culminated 40 years ago with our national symbol being in danger of extinction throughout most of its range.

Since then the federal government banned the use of DDT and placed the American Bald Eagle under the protection of the Endangered Species Act. This listing of our national symbol as an endangered species gave the US Fish and Wildlife Service and other agencies the ability to help bring about the recovery of American Bald Eagles through captive breeding programs, reintroduction efforts, and the protection of nest sites during the breeding season. 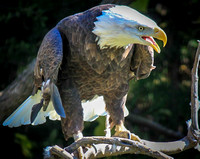 WHAT CAN I DO TO HELP AMERICAN BALD EAGLES?

Post messages on social media platforms such as Facebook, Twitter, and Instagram and send emails to your family and friends expressing your concern for the plight of the American Bald Eagle and encouraging them to become involved as well. 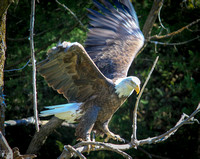 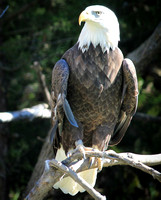