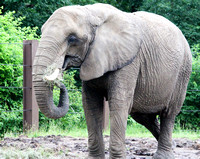 For more photos of Elephants and Rhinos and Hippos in my online gallery, click here! 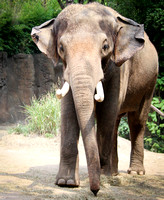 DIET: Elephants are herbivores (vegetation eaters) who eat grasses, fruits, roots, and bark. Elephants travel great distances looking for food and water, and they can eat up to 300 pounds of food and drink up to 50 gallons of water in one day! 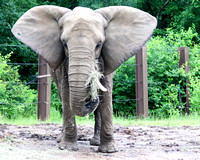 A male Elephant is called a bull

A female Elephant is called a cow

A young Elephant is called a calf

A group of Elephants is called a herd

African Elephants are the largest land mammals on Earth.

Elephants are social animals that live in small family groups, usually made up of an older matriarch (dominant mother figure) and several generations of female relatives. Male Elephants normally live by themselves, but they can also live in small groups of three to four bulls. Elephants care for weak or injured members, and they even seem to mourn the death of other Elephants.

Elephants have the longest pregnancy of all mammals, carrying their young for 22 months before giving birth!

Elephants have about 150,000 muscles in their trunk- 230 times more than a human has in their entire body!

Elephants can communicate with each other using low-frequency calls than can travel over large distances. Two-thirds of these calls are sent out at a frequency below the range of human hearing 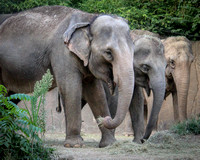 According to the International Union for Conservation of Nature (IUCN) Red List of Threatened Species, the conservation status of Elephants are as follows:

African Elephants are vulnerable, which means that they may become endangered if their circumstances don’t improve.

Additionally, African Elephants are threatened by the rapid growth of humans in areas inhabited by them. This is bringing about habitat loss, population fragmentation, and is also increasing the number conflicts between humans and African Elephants.

Asian Elephants are endangered, which means that there is a very high risk of them becoming extinct in the wild.

There are an estimated 25,600-32,750 Asian Elephants currently living in the wild, and their numbers are said to be dropping.

WHAT CAN I DO TO HELP ELEPHANTS?

Educate yourself about Elephants and their circumstances by reviewing the materials presented below in the Resources section and other materials you may be able to find on your own.

Post messages on social media platforms such as Facebook, Twitter, and Instagram and send emails to your family and friends expressing your concern for the plight of the Elephants and encouraging them to become involved as well.

Write letters to your elected officials in Washington DC and to leaders in nations where Elephants live explaining why the conservation of Elephants is important to you and encouraging these officials to work to help keep Elephants from ever becoming extinct in the wild. 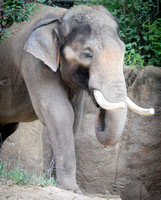 The Elephant Sanctuary in Tennessee page 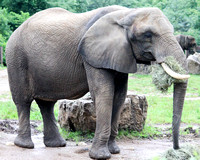