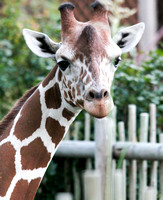 For more photos of Giraffes and zebras and okapis in my online gallery, click here!

GENERA/SPECIES (ACCORDING TO THE GIRAFFE CONSERVATION FOUNDATION):

LIFE SPAN: African Giraffes can live up to 25 years in the wild.

HABITAT: Giraffes are native to Africa, and they live primarily in the savannas, grasslands, and open forests of the sub-Saharan regions of the continent.

DIET: Giraffes are herbivores (vegetation eaters) whose favorite food is the acacia (a variety of trees and shrubs that are common in areas where Giraffes live). They also eat herbs, fruits, seeds and leaves- depending on the season. Giraffes don’t have to eat as much as other animals that graze because their long necks enable them to reach high into the trees and consume the part of the plants that has the most nutrients. 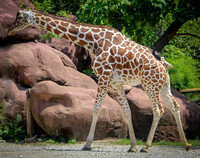 A male Giraffe is called a bull

A female Giraffe is called a cow

A young Giraffe is called a calf

A group of Giraffes is called a tower or a journey

Giraffes are the tallest land mammals. Their legs alone are approximately 6 feet tall, which is taller than many humans!

Giraffes are highly social animals who travel around in groups called “towers”. These groups generally have 15 members- an adult male leader along with females and young males.

Despite their long necks, Giraffes have the same number of vertebrae in their necks as humans—just 7. However, each individual Giraffe neck vertebra is super-sized and measures up to 10 inches long.

Female Giraffes give birth standing up. This means that newborns enter the world with an approximate 5 foot drop to the ground! However, infant Giraffes quickly gain their feet as they are standing within 30 minutes and they are running with their mothers within a few hours of being born! 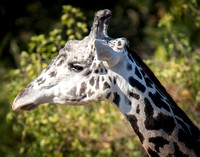 According to the International Union for Conservation of Nature (IUCN) Red List of Threatened Species, the conservation status of Giraffes (the IUCN still considers all Giraffes to be included in one species “Giraffa Camelopardalis”) is as follows:

Giraffes are vulnerable, which means that they may become endangered if their circumstances don’t improve.

The IUCN and the Giraffe Conservation Foundation indicate that the Giraffe population has declined by approximately 40% over the past 3 decades. These organizations state that there are less than 100,000 Giraffes living in the wild today. 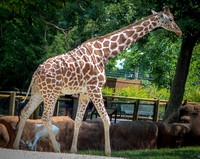 WHAT CAN I DO TO HELP GIRAFFES?

Educate yourself about Giraffes and their circumstances by reviewing the materials presented below in the Resources section and other materials you may be able to find on your own.

Post messages on social media platforms such as Facebook, Twitter, and Instagram and send emails to your family and friends expressing your concern for the plight of the Giraffes and encouraging them to become involved as well.

Write letters to your elected officials in Washington DC and to leaders in nations where Giraffes live explaining why the conservation of Giraffes is important to you and encouraging these officials to work to help keep Giraffes from ever becoming extinct in the wild. 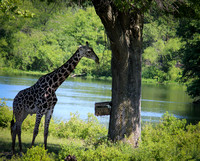 Do Something.org: 11 Facts About Giraffes

Mental Floss: 20 Things You Might Not Know About Giraffes

Nature.com: “DNA reveals that Giraffes are four species — not one” 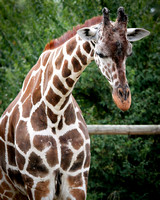