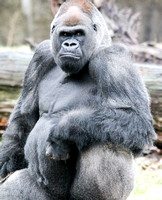 For more photos of Gorillas and other primates in my online gallery, click here! LIFE SPAN: Gorillas normally live 35-40 years in the wild and up to 50 years in captivity. 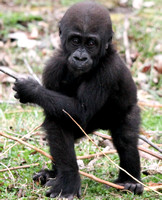 A young Gorilla is called an infant

A group of Gorillas is called a band or a troop

Gorillas, the largest of the primates, are closely related to humans. Ninety-eight percent of their DNA is identical to that of humans!

Gorillas are quadrupedal, which means that they move around by walking on their knuckles.

Gorillas play a vital role in seed dispersal. Many large fruit trees depend upon these roaming herbivores to survive as gorillas scatter their seeds as they travel from place to place. 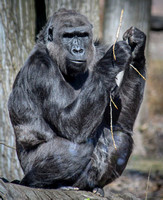 It is likely that fewer than 5,000 Eastern Gorillas remain in the wild today. This is down from in 1995 when 16,900 were estimated to be existing in the wild.   Widespread habitat insecurity and poaching for bushmeat (especially around mining camps) have led to the Eastern Gorilla population to become increasingly fragmented and their numbers to be greatly reduced. 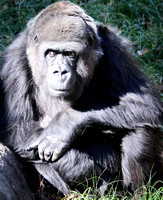 WHAT CAN I DO TO HELP GORILLAS?

Educate yourself about Gorillas and their circumstances by reviewing the materials presented below in the Resources section and other materials you may be able to find on your own.

Post messages on social media platforms such as Facebook, Twitter, and Instagram and send emails to your family and friends expressing your concern for the plight of the Gorillas and encouraging them to become involved as well.

Write letters to your elected officials in Washington DC and to leaders in nations where Gorillas live explaining why the conservation of Gorillas is important to you and encouraging these officials to work to help keep Gorillas from ever becoming extinct in the wild. 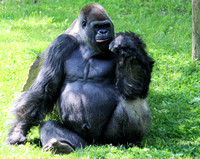