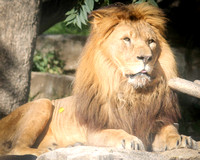 For more photos of Lions and other members of the cat family in my online gallery, click here! 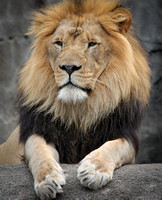 LIFE SPAN: Lions normally live 15 years in the wild, and can live up to 30 years in captivity

HABITAT: Although called “the king of the jungle”, African Lions actually live in the grasslands, scrub, and open woodlands of sub-Saharan Africa. Asiatic Lions live in the Gir National Park and Wildlife Sanctuary in the Indian state of Gujara. 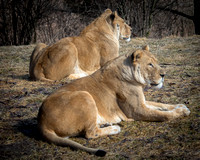 A male lion is called a lion

A female lion is called a lioness

A young lion is called a cub

A group of lions is called a pride

Lions are the second largest cats in the world. They are second only to tigers, who are closely related to lions and have a similar body type to them.

Both male and female lions can roar. Their roar is so powerful that it can be heard up to 5 miles away

Lions, unlike other cats, are highly social animals. They live in groups (called prides) of approximately 30 lions.

Lions typically hunt at night and rest during the day. Spending between 16 to 20 hours at rest each day, lions are the laziest of all the big cats. 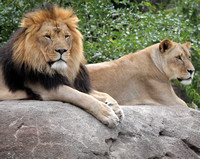 African Lions are considered Vulnerable according to the International Union for Conservation of Nature (IUCN) Red List of Threatened Species. This means that African Lions are likely to become endangered unless the circumstances threatening their survival improve.

Asiatic Lions are considered Endangered according to the International Union for Conservation of Nature (IUCN) Red List of Threatened Species. This means that they are in danger of becoming extinct.

The existence of Lions in both Africa and Asia is threatened by many factors such as hunting by humans, loss of habitat, and disease. Many conservationists are concerned about the population of Lions in the wild. It is estimated that only 6,000 to 10,000 African Lions remain in the wild, and less than 600 Asiatic Lions are thought to remain in the wild. 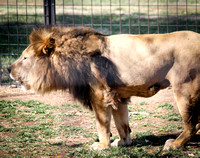 WHAT CAN I DO TO HELP LIONS?

Educate yourself about Lions and their circumstances by reviewing the materials presented below in the Resources section and other materials you may be able to find on your own.

Post messages on social media platforms such as Facebook, Twitter, and Instagram and send emails to your family and friends expressing your concern for the plight of the Lions and encouraging them to become involved as well.

Write letters to your elected officials in Washington DC and to leaders in nations where Lions live explaining why the conservation of Lions is important to you and encouraging these officials to work to help keep Lions from ever becoming extinct in the wild.

And when you shop at Joe’s Cowtown Photos, you can designate Lion-centric programs and initiatives such as National Geographic’s Big Cat Initiative, Panthera’s Project Leonardo, and the World Wildlife Fund’s Adopt a Lion Program as the beneficiary of the charitable portion of your purchase. (For more information on Joe’s Cowtown Photos charitable giving program, Cowtown Photos Cares!, click here!) 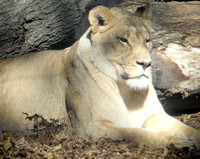 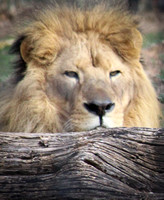