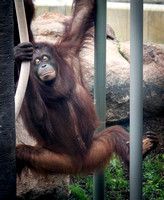 For more photos of Orangutans as well as photos of other Apes, Monkeys, and Lemurs in my online gallery, click here!

GENERA and SPECIES: (According to the International Union for Conservation of Nature (IUCN) 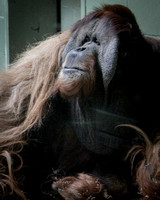 HABITAT: Orangutans live in the tropical rainforests of Sumatra and Borneo in southeast Asia.

DIET: Orangutans primarily eat fruit and leaves, but they also eat bark, nuts, insects, and, on occasion, bird eggs. The fruit of the diurnal tree is an Orangutan’s favorite food. This large fruit has a foul odor and tastes like garlic flavored cheese, but Orangutans love this fruit so much that they have been known to sneak into people’s yards to pick it! 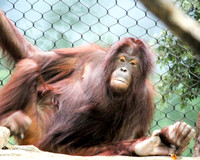 A young Orangutan is called a baby or an infant

In Malay, the word “orang” means “person” and “utan” is derived from the Malay word “hutan”, which means “forest.” Therefore, “Orangutan” literally means “person of the forest.”

Orangutans are the only apes that live in Asia. The other three great apes – Gorillas, Chimpanzees, and Bonobos– all live in Africa

Orangutans are the largest beings on Earth who live in trees. Adult male Orangutans spend over 90 per cent of their time in the canopy, and adult females spend even more time than that in the treetops.

Orangutans can stretch their arms out wider than their bodies are long – up to 8 ft. from fingertip to fingertip for very large males!

Unlike other higher primates (monkeys, apes, and humans), Orangutans are semi-solitary in the wild. Once they reach maturity, these apes spend most of their time alone, or, in the case of females, with their young off-springs. Mature adult males are the most solitary of these apes- spending more than 90 per cent of their time alone.

Adult male Orangutans grow cheek pads (also called flanges), which outline their faces and make their heads look larger. In the wild, male Orangutans may not develop their cheek pads until they are 30 years of age. But in captivity, males as young as 13 grow cheek pads. Once a male Orangutan has grown his cheek pads, he won't tolerate being around any other adult males and will compete with them for access to receptive females.

Female Orangutans produce children approximately once every 8 years. Infants stay with their mother for 6 to 7 years, until they have learned how to survive on their own. During this time spent together, a very special bond develops between the mother her child. 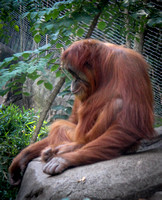 According to the International Union for Conservation of Nature (IUCN) Red List of Threatened Species, the conservation status of Orangutans is as follows:

Bornean Orangutans are Critically Endangered, which means that they are at a critical risk of becoming extinct in the wild. The IUCN states that these apes suffered a drastic population loss of 60% between 1950 and 2010, and that they are projected to undergo a further decline of 22% between 2010 and 2025.

The biggest threats to the existence of Bornean Orangutans are the destruction, degradation and fragmentation of their habitats as well as hunting. Approximately once every decade, forest fires (especially in peat forests) cause additional severe losses to the Bornean Orangutan population.

Sumatran Orangutans are Critically Endangered, which means that they are at a critical risk of becoming extinct in the wild.

High levels of habitat conversion and fragmentation and illegal killing are the biggest threats faced by the Sumatran Orangutans. The area of their forest habitat was reduced by 60% between 1985 and 2007, and it is believed that this reduction will continue. Large portions of the Sumatran Orangutan’s range are seriously threatened by agricultural plantations, logging, mining concessions, as well as illegal settlement and encroachment by humans. Additionally, new roads are constantly being cut through their habitats.

Tapanuli Orangutans are Critically Endangered, which means that they are at a critical risk of becoming extinct in the wild.

The chief threats to the survival of these apes are to the severe reduction and fragmentation of their habitats and illegal killing. The territory of the Tapanuli Orangutans was reduced by 60% between 1985 and 2007, and it is believed that this habitat loss will continue for the Tapanuli Orangutan as the forests within their range remain under immense threat from habitat conversion for small-scale agriculture, mining exploration and exploitation, agricultural plantations, and other sources. 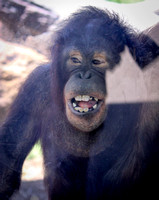 WHAT CAN I DO TO HELP ORANGUTANS?

Educate yourself about Orangutans and their circumstances by reviewing the materials presented below in the Resources section and other materials you may be able to find on your own.

Post messages on social media platforms such as Facebook, Twitter, and Instagram and send emails to your family and friends expressing your concern for the plight of the Orangutans and encouraging them to become involved as well. 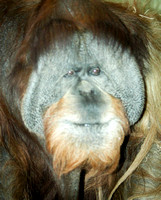 Easy Science for Kids: Fun Facts About Orangutans for Kids