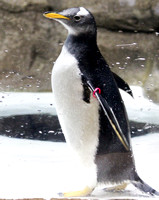 For more photos of Penguins as well as photos of other species of birds in my online gallery, click here!

FAMILY: Spheniscidae (Family of flightless birds of which Penguins are the only members)

GENERA and SPECIES: (According to the International Union for Conservation of Nature (IUCN) 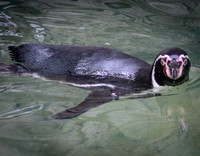 LIFE SPAN: Penguins can live 15-20 years in the wild, depending on the species.

HABITAT: Penguins spend between 50-75% of their time in the water and the rest of it on dry land. Most species of Penguins live in the Southern Hemisphere. Only the Galapagos Penguin lives north of the equator in the wild. Large populations of Penguins can be found on the continent of Antarctica as well as in countries like New Zealand, Australia, Chile, Argentina and South Africa. However, no Penguins live in the wild at the North Pole.

DIET: Penguins eat a variety of fish and other sea life such as squid, crustaceans, and small shrimplike animals called "krill" that they catch underwater. Penguins are also able to drink sea water. 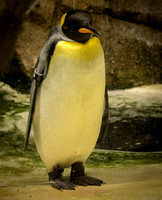 A young Penguin is called a chick

A group of Penguins is called a raft when they are swimming in the water and a colony, a waddle, a huddle, or a rookery (during breeding season) when they are on dry land

Penguins are flightless birds who have adapted flippers, instead of wings, to help them swim in the water.

The body of a Penguin is shaped like a torpedo.  This sleek body design helps them be efficient swimmers who are able to reach average speeds of 15 miles per hour in the water. Gentoo Penguins are the fastest swimming species of these flightless birds, and they can reach speeds of up to 22 miles per hour when they are in the water!

The distinct tuxedo-like coloring of a Penguin’s plumage (feathers) called “counter-shading” is a form of camouflage. When seen from above, their black backs help them blend into the murky depths of the ocean. And when viewed from below, their white bellies enable them to hide against the brightness of the surface.

Penguins (unlike most other birds who gradually replace their feathers over the course of the year) go through a process called catastrophic moulting, where they replace all of their feathers in the space of a few weeks. Penguins cannot enter the water while they are moulting, so they need to accumulate enough fat prior to this process so that they can fast during this period of replacing their feathers.

Penguins who live in cold environs spend a great deal of their time coping with the inclement weather.  Like people, Penguins are warm-blooded beings and they have a normal body temperature of approximately 100 degrees F. These birds are able to keep warm thanks to a layer of fat that Penguins have under their skin called "blubber".  On top of the blubber, Penguins have a layer of fluffy "down" feathers and then a layer of outer feathers that overlap to seal in warmth.  Penguins also rub natural oil onto their feathers to help make them waterproof and windproof. Additionally, groups of Penguins huddle shoulder to shoulder with their wings tight against their bodies in an effort to help keep warm.  As many as 5,000 Penguins have been known to bunch together to help warm each other up!

Each Penguin has their own distinctive call. This allows individuals to find their mate and their chicks even when they are in large groups.

When Emperor Penguins mate, the females of this species will place their eggs in the fat folds of the male's feet to keep them warm. Then the females will go off to hunt for several weeks, leaving the males to keep watch over their eggs. 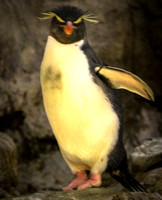 According to the International Union for Conservation of Nature (IUCN) Red List of Threatened Species, the conservation status of the different species of Penguins is as follows:

Northern Rockhopper Penguin, Big-crested Penguin, Yellow-eyed Penguin, African Penguin, Galapagos Penguin - Endangered, which means that they are seriously at risk of becoming extinct in the wild

Southern Rockhopper Penguin, Macaroni Penguin, Fiordland Crested Penguin, Snares Crested Penguin, Humboldt Penguin - Vulnerable, which means that they are likely to become endangered unless the circumstances that are threatening their survival and reproduction improve.

Emperor Penguin, Royal Penguin, Magellanic Penguin - Near Threatened, which means they may be considered threatened with extinction in the near future, although they do not currently qualify for the threatened status.

King Penguin, Blue Penguin, Adelie Penguin, Chinstrap Penguin, Gentoo Penguin - Least Concern, which means that they have been evaluated but do not qualify for any other category (threatened, near threatened, or conservation dependent).

Human disturbance is a threat common to Less Extreme Southern Located species of Penguins (African Penguins, Magellanic Penguins, Humboldt Penguins, and Galapagos Penguins). This threat manifests itself in the forms of oil spills, pollution, commercial shipping, fisheries, egg and guano collectors, tourists, and the development of harbors and shipping ports.

Another threat facing these Penguins is changes in climate such as the dynamics of El Nino-La Nina in the Humboldt Current System (most especially impactful for the Magellanic Penguins, Humboldt Penguins, and Galapagos Penguins). This climate change affects the amount of prey that is available for these Penguins to eat as well as the mortality of Penguin chicks and the number of nests that are abandoned by these Penguins

Climate change is a threat that is common to the Extreme Southern Located species of Penguins (all species of Penguins that were not referenced above). This phenomenon is seen primarily through decreases in the thickness and concentration of sea ice, the increase in the temperature of the surface of the sea, the speed and persistence of the wind, and changes in the amount of precipitation received in these areas.

Human impact is another common threat to these Penguins. Oil spills, commercial fishing, the disturbance caused by tourists and scientists, and the construction of new fisheries and science facilities are ways in which humans are adversely impacting the existence of these birds.

Predation (being hunted) by animals such as ferrets, stoats, pigs, unleashed dogs, and feral cats is yet another threat faced by these Penguins (most especially by the Yellow-eyed Penguin) 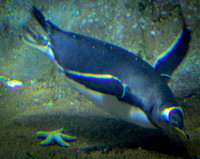 WHAT CAN I DO TO HELP PENGUINS?

Educate yourself about Penguins and their circumstances by reviewing the materials presented below in the Resources section and other materials you may be able to find on your own.

Post messages on social media platforms such as Facebook, Twitter, and Instagram and send emails to your family and friends expressing your concern for the plight of the Penguins and encouraging them to become involved as well.

Write letters to your elected officials in Washington DC, to leaders in nations where Penguins live, and to leaders in non-governmental organizations (NGO’s) that work in the fields of wildlife conservation and wildlife management explaining why the conservation of Penguins is important to you and encouraging these officials to work to help keep Penguins from ever becoming extinct in the wild. Discover the World: 29 Things You Might Not Have Known About Penguins 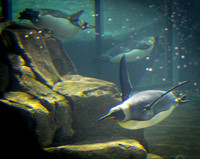