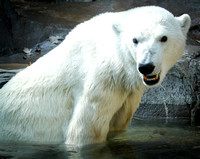 For more photos of Polar Bears and other members of the bear family in my online gallery, click here! 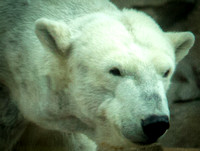 LIFE SPAN: Polar Bears can live up to 25-30 years in the wild

HABITAT: Polar Bears live in the Arctic, and they can be found in Alaska, Canada, Russia, Greenland, and Norway.

A male Polar Bear is called a boar

A female Polar Bear is called a sow

A young Polar Bear is called a cub

A group of Polar Bears is called a pack, a sleuth, or an aurora

Polar Bears are the largest land carnivores in the world. They are rivaled only by the Kodiak brown bears of southwestern Alaska

Contrary to popular belief, a Polar Bear's fur is not white- it’s transparent! Each of their hairs is a clear hollow tube that reflects sunlight, traps the sun's infrared heat, and helps keep the Polar Bear warm.

A Polar Bear's skin is black. Their black skin soaks up the sun's heat and helps Polar Bears stay warm.

Polar Bears can swim up to 6 miles per hour- almost twice as fast as US Olympic champion swimmer Michael Phelps!

Polar Bears have an incredible sense of smell. Their sense of smell is so good that they can sniff out prey from almost 10 miles away! 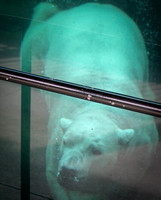 Polar Bears are considered Vulnerable according to the International Union for Conservation of Nature (IUCN) Red List of Threatened Species. This means that Polar Bears are likely to become endangered unless the circumstances threatening their survival improve.

Loss of Arctic sea ice due to climate change is the most serious threat to the Polar Bears’ existence. Polar Bears need sturdy pack ice for hunting, denning, and mating, and there is the potential for large reductions in the global Polar Bear population if sea-ice loss continues.

Polar Bears are having a difficult time maintaining their food supply of seals because of the loss of sea ice. Mother Polar Bears aren’t able to put on enough body weight to nurse their cubs and many cubs are left starving. Some Polar Bears are even drowning as they are having to swim further and further distances in search of food. 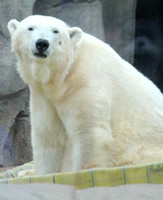 WHAT CAN I DO TO HELP POLAR BEARS?

Educate yourself about Polar Bears and their circumstances by reviewing the materials presented below in the Resources section and other materials you may be able to find on your own.

Post messages on social media platforms such as Facebook, Twitter, and Instagram and send emails to your family and friends expressing your concern for the plight of the Polar Bears and encouraging them to become involved as well.

Write letters to your elected officials in Washington DC and to leaders in nations where Polar Bears live explaining why the conservation of Polar Bears is important to you and encouraging these officials to work to help keep Polar Bears from ever becoming extinct in the wild. 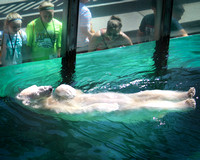 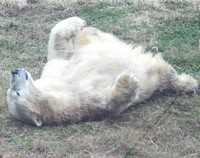