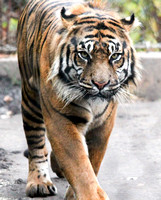 For more photos of Tigers as well as photos of other members of the cat family in my online gallery, click here!

Different Sub-species of Tigers in Existence:

HABITAT: Tigers are native to Asia, and historically their population was distributed throughout most of this continent and in several adjoining islands as well. However, throughout the last century, the population of Tigers has been dramatically reduced. Presently, Tigers only exist in the wild in Southeast Asia, India, parts of Russian, western China, and the island of Sumatra.

DIET: Tigers are carnivores (meat eaters) who primarily feed on large mammals such as deer, wild pigs, antelope, and buffalo. 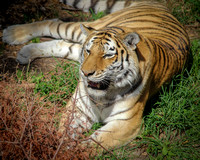 A male Tiger is called a tiger

A female Tiger is called a tigress

A young Tiger is called a cub or whelp

Tigers are the largest wild cats in the world. Adults can weigh more than 800 pounds and measure up to 10 feet.

Tigers typically live solitary lives and do not remain in permanent groups like lions do. Generally, Tigers live by themselves except when females are raising their cubs.

Adult Tigers can consume up to 88 pounds of meat in one meal and will often stay with their kill or bury it so that they can return and feed off of their game for a period of days. Tigers may not kill again for 4-5 days. It's estimated that Tigers are only successful about 1 in every 10 to 20 attempts when they are hunting.

Tigers, unlike most big cats, are powerful swimmers who have been known to swim great lengths to hunt or cross rivers. Tiger cubs often play in the water, and adult Tigers will frequently relax in streams or lakes to cool off during the heat of the day.

No two tigers have the same stripes. The tigers’ stripe patterns are unique to each individual animal- like a human fingerprint!

White Tigers are not a separate subspecies nor are they albinos. Rather, they are the result of a recessive gene that’s been passed down from each of their parents that affects the Tigers’ pigmentation.

According to the World Wildlife Fund, there are more Tigers living in captivity in the United States than there are living in the wild! 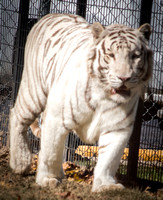 According to the International Union for Conservation of Nature (IUCN) Red List of Threatened Species, the conservation status of Tigers is as follows:

This means that the different sub-species of Tigers are facing a serious risk or an extremely serious risk of becoming extinct in the wild.

Poaching is the primary threat to the existence of Tigers. The illegal trade in high-value Tiger products such as skins, meat, bones, and tonics has caused the recent disappearance of Tigers from a significant portion of their previous habitats.

Additionally, dense populations and rapid development throughout large segments of Asia have been placing a great deal of pressure on Tiger populations. The conversion of forest lands into farms, commercial logging areas, and human settlements is causing Tigers to lose their habitats as well as the large prey base they need to remain healthy that previously lived in those settled lands.

Moreover, Tiger attacks on livestock and people are creating an intolerance of Tigers in neighboring communities. This issue is presenting ongoing challenges to wildlife managers as they work to build local support for Tiger conservation. This matter is also leading to the retaliatory killing of a great number of Tigers by the aggrieved people. 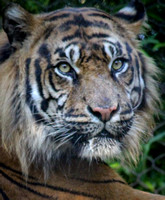 WHAT CAN I DO TO HELP TIGERS?

Educate yourself about Tigers and their circumstances by reviewing the materials presented below in the Resources section and other materials you may be able to find on your own.

Post messages on social media platforms such as Facebook, Twitter, and Instagram and send emails to your family and friends expressing your concern for the plight of the Tigers and encouraging them to become involved as well.

Write letters to your elected officials in Washington DC, to leaders in nations where Tigers live, and to leaders in non-governmental organizations (NGO’s) that work in the fields of wildlife conservation and wildlife management explaining why the conservation of Tigers is important to you and encouraging these officials to work to help keep Tigers from ever becoming extinct in the wild.

And when you shop at Joe’s Cowtown Photos, you can designate Tiger-centric programs and initiatives such as the World Wildlife Fund’s Adopt a Tiger Program, the National Geographic Society’s Big Cats Initiative, and Panthera’s Save the Tiger Fund as the beneficiary of the charitable portion of your purchase. (For more information on Joe’s Cowtown Photos charitable giving program, Cowtown Photos Cares!, click here.) 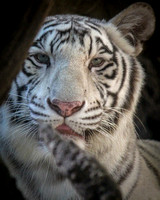 Reference.com: What is a Male Tiger Called?

World Wildlife Fund: More Tigers in American Backyards than in the Wild 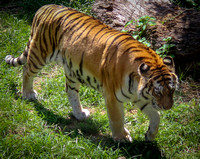