For more photos of Zebras as well as photos of Giraffes and Okapis in my online gallery, click here!

ORDER: Perissodactyla (Non-ruminant ungulate mammals like the horse, the tapir, and the rhinoceros who among other similar characteristics typically have an odd number of toes.) Notes: “Non-ruminant” = “an animal that doesn’t chew their cud”. “Ungulate” = “hoofed mammal”

GENERA/ SPECIES: (According to the International Union for Conservation of Nature (IUCN) 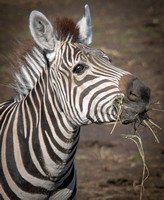 LIFE SPAN: Zebras can live up to 25 years in the wild.

HABITAT: Although all zebras live in Africa, each species has their own home areas. Plains Zebras inhabit the treeless grasslands and woodlands of Southern and Western Africa. Grevy's Zebras live in the dry grasslands of Ethiopia and Northern Kenya. Mountain Zebras are located in Namibia, Angola, and South Africa.

DIET: Zebras are herbivores (vegetation eaters) who eat mostly grass, though some also eat twigs and leaves. According to the African Wildlife Foundation, zebras will migrate up to 1,800 miles in search of food! 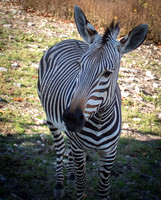 A male Zebra is called a stallion

A female Zebra is called a mare

A young Zebra is called a foal

A group of Zebras is called a herd

Zebras are swift animals who can reach speeds of up to 40 mph when they are at full gallop. This enables them to out run predators such as lions and leopards. Baby zebras are able to run with the herd within a few hours of being born!

Zebras are social animals who live together in large groups, called herds. When zebras migrate in search of food, they may form ‘super herds’ that are made up of thousands of individual zebras. Additionally, zebras may also join forces with other grazing animals such as wildebeest and impalas while they are traveling.

Although they appear peaceful while they are grazing, Zebras are actually fierce fighters!  These animals forge strong bonds among themselves to help protect themselves from predators. When they are threatened, Zebras form a semi-circle facing the attacker, and prepare to strike if need be. And if one of the group is ever injured, the other Zebras will circle around the wounded and attempt to chase away the hungry attackers.

A Zebra’s stripes are like fingerprints. They are all unique to themselves and they help Zebras recognize each other.

It is thought that a Zebra’s stripy coat helps to break up more than 70% of the heat that comes from the warm African sun. Zebra's stripes also help keep them camouflaged in the tall grass and they make it harder for predators to single Zebras out. Their stripes make Zebras blend together with each other when they are in a group. According to the International Union for Conservation of Nature (IUCN) Red List of Threatened Species, the conservation status of Zebras is as follows:

Hunting is the primary reason for the decline of Grevy’s Zebras in Ethiopia. These Zebras are hunted primarily for their skins, but they are also occasionally killed for food and even for medicinal use in certain regions. Additionally, Grevy’s Zebras are facing competition for resources from other grazing wildlife as well as from cattle and livestock. This overgrazing and competition for water is causing the juvenile Grevy’s Zebras to have a low survival rate.

Plains Zebras are Near Threatened, which means that they may be considered threatened with extinction in the near future. The total population across the Plains Zebra’s range is estimated by the IUCN to be over 500,000 animals- with an estimated 150,000 to 250,000 of those Zebras being mature individuals. However, Plains Zebras have suffered a population reduction of 24% since 2002.

The major threat faced by Plains Zebras is hunting (primarily for their skins) throughout much of their habitat- especially when they move out of protected areas. These Zebras also experience difficulties with fenced in areas that can block their migration corridors

Mountain Zebras are Vulnerable, which means that it is likely they will become endangered unless the circumstances that are threatening their survival and their reproduction improve. The total population of Mountain Zebras is currently estimated at 9,000 mature individuals. The IUCN forecasts that this population could be subject to a decline of more than 10% over the course of the coming 27 years. This speculation is largely driven by the annual harvesting of the Hartmann's Mountain Zebra population. 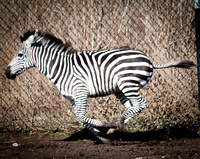 WHAT CAN I DO TO HELP ZEBRAS?

Educate yourself about Zebras and their circumstances by reviewing the materials presented below in the Resources section and other materials you may be able to find on your own.

Post messages on social media platforms such as Facebook, Twitter, and Instagram and send emails to your family and friends expressing your concern for the plight of the Zebras and encouraging them to become involved as well.

Write letters to your elected officials in Washington DC, to leaders in nations where Zebras live, and to leaders in non-governmental organizations (NGO’s) that work in the fields of wildlife conservation and wildlife management explaining why the conservation of Zebras is important to you and encouraging these officials to work to help keep Zebras from ever becoming extinct in the wild. 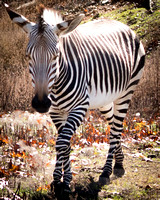 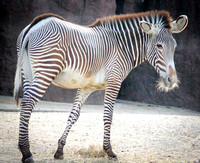