#Help #animals survive in the wild! Come to the first #event for @CowtownPhotos in #KC on Sun Nov 4! It's a benefit for the @IAPF and their work to protect #wildlife in #Africa. For more info visit CowtownPhotos.com! #fundraiser #photos #charity #wildlifephotography #nature

Click here to return to the IAPF Event Main Page! 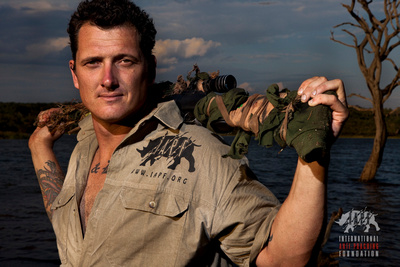 Photo of Damien Mander, founder of the IAPF

The International Anti-Poaching Foundation (IAPF) was founded in 2009 by Damien Mander, a former sniper and clearance diver for the Royal Australian Navy.

Through the IAPF, Damien is training rangers to utilize militaristic tactics like the ones he employed and taught during his 12 tours of duty in Iraq to protect wildlife in Africa. This training is invaluable for rangers as poachers themselves often use paramilitary strategies and weapons to track down and kill wildlife. To date, the IAPF has assisted with the training of hundreds of rangers in Zimbabwe, Mozambique and South Africa. The IAPF is also working to expand its operations into other countries like Malawi and Kenya.

Mander believes that leaders should be trained- and that they should be trained well. He strongly feels that if leaders are armed with skills and knowledge, and if they know how to efficiently manage a team of rangers, that conservation efforts will be much more effective. To this end, Damien has said: “There’s no such thing as bad soldiers — only bad generals,” and “We need better leaders in terms of law enforcement.”

Mander also comprehends that rangers should receive ongoing training from their immediate supervisors. “[Rangers] are expected to know and learn and maintain a multitude of skills — everything from human rights to ‘search and arrest’, to weapons skills to camouflage and concealment, and how to deal with every animal that’s out in the bush,” Mander said. “These are perishable skills — they need to be continually taught and updated.”

For many years, the fight against poaching in Africa has been a constant and uphill battle. It’s estimated that an elephant is butchered by poachers every 15 minutes for its ivory, and that every 8 hours a rhino is slaughtered in South Africa for its horn. Despite the immense challenges that the IAPF faces, Mander remains hopeful, and he believes that his organization is playing a vital role in reducing poaching in Zimbabwe, Mozambique, and South Africa. Damien said: “I sleep at night knowing the situation would be much worse if we weren’t doing what we’re doing.” He added: “These animals get to live their lives because of the work we’re doing.”

For more information on the IAPF and their works to help animals survive in the wild, please visit their official website www.IAPF.org! 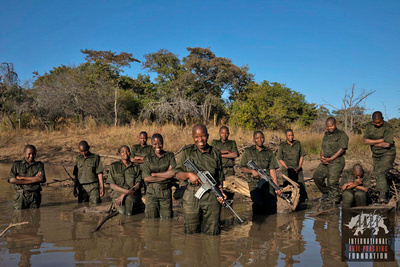 Akashinga (which means “the brave ones”) is an innovative, all-female ranger unit of the International Anti-Poaching Foundation (IAPF).

IAPF founder Damien Mander was inspired to form Akashinga by the story of the Black Mambas, the world’s first female, unarmed anti-poaching unit, who work near Kruger National Park in South Africa. After meeting some members of the Black Mambas while he was on a fundraising trip to New York, Damien saw the international support and interest this unit received and he thought that a similar endeavor in Zimbabwe could be a good way to help raise the profile of his own organization, the IAPF.

Akashinga provides an alternative approach to the militarized paradigm of ‘fortress conservation’ where nature is protected from encroaching humans. Instead of employing an “us versus them” mentality, this all-female ranger team utilizes a community-driven interpersonal focus and these women work with the local populations to attain long-term benefits for their own communities and for nature as a whole.

Women’s empowerment is at the core of Akashinga, and this program is helping transform these dedicated females into community leaders. Akashinga employs the most marginalized women from rural communities (unemployed single mothers, abandoned wives, sex workers, victims of sexual and physical abuse, wives of poachers in prison, widows and orphans). This program educates and trains these women to become rangers and biodiversity managers who are able to protect vast landscapes that were previously reserved for and financed by trophy hunting.

Of the initial training of Akashinga, Damien said: “Thirty-six women started our training, modeled on our special-forces training, and we pushed them hard, much harder than any training we do with men.” Mander added: “Only three dropped out. I couldn’t believe it.”

From the very first day of training this all-female ranger unit, Damien saw that something very special was happening, and he realized that women were the missing link to successful conservation and anti-poaching initiatives. “We have turned a security need into a community programme,” he said. Through the first five months of inception, according to Damien, Akashinga put more money per month into the local community than trophy hunting did per year.

For more information on the founding of Akashinga and the successes that this dedicated all-female ranger unit has been enjoying, please visit www.IAPF.org/Akashinga! 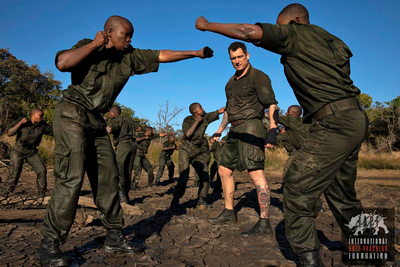 Earth Island Journal 11/15/17: From the War in Iraq to the War against Poaching

The Sydney Morning Herald 6/21/17: Every eight hours, a rhinoceros is slaughtered in South Africa

The Nature Conservancy: Elephants and Ivory: Our Work to End Africa's Poaching Crisis

Buckrail 7/6/18: The new face of anti-poaching activism is female

The Guardian 12/16/17: Africa’s new elite force: women gunning for poachers and fighting for a better life

All photos on this page appear courtesy of the International Anti-Poaching Foundation IAPF.org

Click here to return to the IAPF Event Main Page!